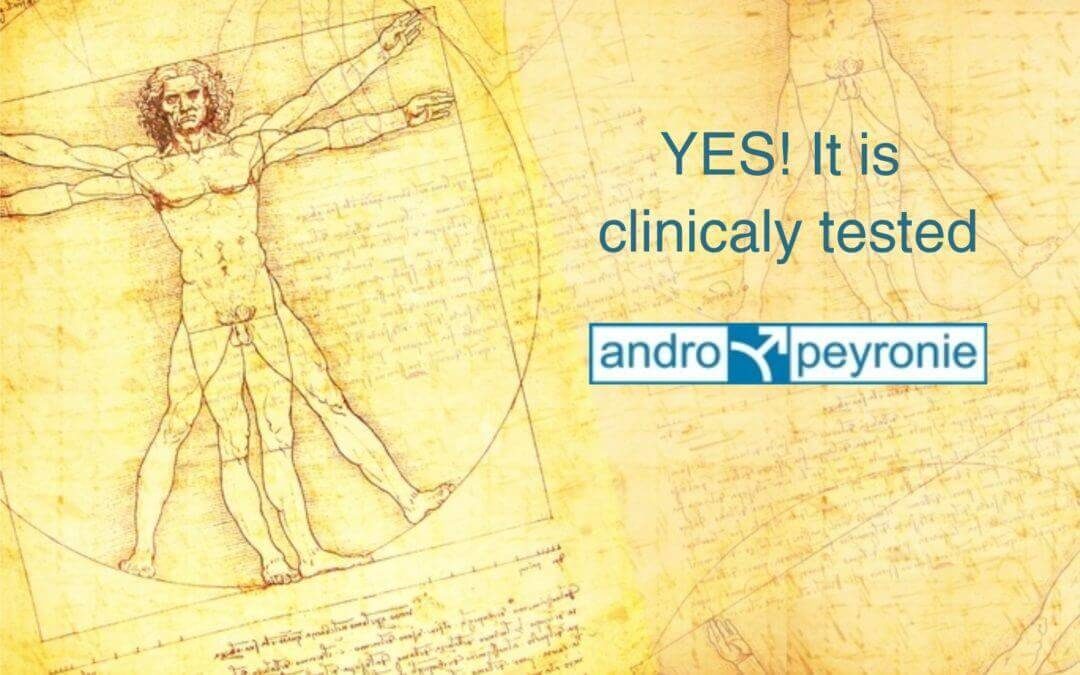 Peyronie’s disease (PD) is an accumulation of collagen in the penis that forms a scar, producing a deformity and pain in the erectile state. This disease affects between 1%-8% of men. The ANDROMEDICAL laboratory announces the great potential of a new combined therapy to treat Peyronie’s disease based on platelet rich fibrin matrix (PRFM or activated-PRP) with Andropeyronie, a penile traction device (PTD) designed to treat penile curvatures. Now urologists, their patients and health insurance companies may have a cost-effective alternative to collagenase and surgery to treat Peyronie’s disease.

In 2013 the US-FDA approved the use of collagenase (CCH) for its treatment. Collagenase is an enzyme that breaks the peptide bonds of collagen, but medical studies showed that effectiveness was limited to a 33% correction of penile curvature. In 2013, Dr. Martínez-Salamanca (Spain) carried out a hospital study with the penile traction device called Andropeyronie to treat Peyronie’s disease in the acute phase, achieving a 60% correction of the curvature with sonographic disappearance of the plaques in 48% of patients. In 2015 the American Urological Association recommends treating Peyronie’s disease with combined collagenase therapy and penis “remodeling”. Peyronie’s plaque remodeling is done by stretching the penis with manual exercises or by applying a soft progressive force for a few hours a day with a penile traction device (PTD).

In 2018 Dr. Terlecki (USA) published a clinical study on the use of autologous platelet rich plasma (PRP) in Peyronie’s disease whose conclusions were that the activated-PRP or PRFM appears to be a safe and feasible treatment, more than 80% of patients improved in their degree of curvature. PRP is derived from the centrifugation of whole blood. Evidence suggests that platelets play an important role in tissue repair, vascular remodeling and inflammatory and immune responses through secretion of growth factors, cytokines and chemokines. The mean receipt of 2 injections per patient (range, 1-8) were placed directly into tunical plaques under ultrasound guidance. Clinical study

The pathophysiology of Peyronie´s disease appears to involve increased inflammation from tissue disruption, followed by aberrant wound healing resulting in fibrotic plaques. Currently there are no therapies targeting either the inflammatory processes or the aberrant wound healing that causes PD. Furthermore, therapies focusing on disrupting the fibrotic plaques through mechanical manipulation or collagenase injection do not address appropriate wound healing or regeneration of the damaged tissue. Theoretically, injection of PRFM could combine mechanical disruption of the plaque, via needle fracture, while simultaneously neutralizing destructive inflammatory processes in an effort to promote a better wound-healing response and stabilize the disrupted plaque.

In 2013 Dr. Chung (Australia) published a scientific study on the mechanism of action of penile traction devices, demonstrating that the application of mechanical stress modulates cell function through mechano-transduction, a cellular process that translates mechanical stimuli into a chemical response leading to activation of cell proliferation. In 2019 Dr. Romero-Otero (Spain) published a clinical study demonstrating that the use of a penile traction device reduces the need of cycles of collagenase in patients with Peyronie’s disease. Clinical studies

The world of urology is advancing rapidly and and many clinics are beginning to use this promising combined therapy of platelet rich plasma with penile traction therapy in hopes of wound healing and tissue regeneration. New treatment options for Peyronie’s disease are opening up, with benefits for patients, urologists and health insurance companies. Therapy of PRP with PTD is an effective treatment without side effects, easily performed in the doctor’s office and a cost-effective alternative to other therapies or surgeries.

Special offers from the manufacturer